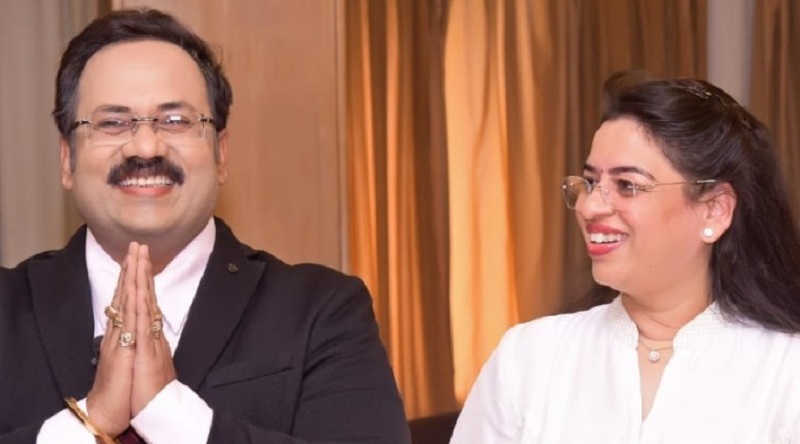 Prominence of a person is judged by his years of experience in his field and his undying efforts to keep on inventing new ideologies for a progressive approach. Rahul Phate gained prominence as an Indian cosmetologist, an Ayurvedic expert, an author and a forever seeker for knowledge. One of the most important decisions of his life was to change the way Indians think about their body that led him to dig deep into the study of Ayurveda and modern science since childhood. His life has been that of his century—progressive, liberal, humanitarian in its trend where his wife ‘Mrunalini’ has been a part of. Read on to know about his blissful journey of life.

Born as a Cosmetologist

Born in Saoner-Nagpur in 1970, Rahul Phate experienced re-incarnation processes in his childhood where his journey towards spirituality begun. With the blessings of Goddess Mahalakhsmi, he was guided to work on the concept of Dhyana (The chakra based meditation). His sadhana was initiated in his early age with the silent mode of life which also incorporated the scientific studies of Pharmacy. These scientific studies and its research gave him deep insights on Anatomy and Physiology. Neuro-pharmacology, being a part of these studies, helped him scientifically understand the chemical changes happening in the brain during the process of dhyana.

Rahul Phate is originally a Pharmacologist and has done his M. Pharm in Pharmacology form Nagpur University. With his insightful knowledge and hard work, he was bestowed with the prestigious Gold Medal of Sir Salebhai Wali for standing first in the University for M. Pharm and as a Distinction holder.

He gained authority in:

Skin – His area of special interest was skin penetration enhancement and herbal medicines.

Pharmacognosy – This deals with the scientific study of the medicines from natural origin and their use in medicine. Hair – His exclusive research in Pharmacognosy and cosmetics has revealed many exclusive products for hair and skin.

Stone Therapy – He is a pioneer of Shree Stone Therapy of India, which is based on the Kundalini and chakra sciences and the related massages. He is the first person to introduce herbal Ayurvedic on scientific basis and scientific concepts of SPA to the beauty world.

Trichology – He has done scientific research and study of Trichology, where herbs and certain cosmetic ingredients are prominently used to improve the overall scalp condition.

Skin Peels – Rahul Phate is the first name in India who has arrived with the Cosmetic Peeling technology in scientific way through the introduction of Graded Peels. He is pioneer in the sustained release and viscosity balanced peels.

In the year 2002, he was enlightened by Darshan of Vasudevanand Saraswati Swami Maharaj that bought about a drastic change in his life. Swamiji took Samadhi 95 years back in Garudeshwar Gujrat without being in a physical form. Rahul Phate is blessed to still seek the guidance of Swamiji on the aspects of life and spirituality whenever needed that helped him initiate his first work of progress on the poetric (Ovi Roop) Dnyaneshwari in Marathi Language. Another major work performed under the direct guidance of Swamiji is the publication of Ovi Roop Marathi Dwisahasri Gurucharithr, which is the oviroop translation of Sanskrit Guru Charitra.

Back in 1999 during his research on Indian herbs and their utility in beauty industry, he discovered how tremendously these herbs affect skin, hair and body of a human. This led him to start with an Ayurvedic company named ‘Mrunalini Special Herbs’ where products were created based on the studies of Ayurveda.

After gaining tremendous knowledge on blending traditional scientific studies with modern-day methodology, he begun with another company named ‘Mrunalini Ayurveda Pvt. Ltd.’ in 2005. His continuous and rigorous research on creating indigenous products that worked wonders for the Indian skin helped him sail through the tide. This company was the only in India to research on cosmetics. This fuelled up his curiosity to understand the need of cosmetic products by Indians on their skin and body. After understanding it thoroughly, he and his team propagated its usefulness in the market.

Concept of Beauty by Rahul Phate

The concept of enhancing beauty with specialised products was introduced in India by the British people. Britain always experienced a dry and cold climate. With absolutely no humidity in the air, people there always experienced closed pores and dryness on their skin. To open blocked pores and make the skin breathe, they would always expose their skin to steam. This concept was taught to Indians and since then Indians have been following this practice of using steam to open the pores. What they fail to understand is the level of dirt that floats in the air here and keeping the pores open for longer hours of the day meant damaging the skin enormously.

Rahul Phate acknowledged this ideology adapted by Indians since the era of our rulers and he thought that it should be corrected by progressive but prudent training. It took him more than 12 years to teach the beauticians of our country about different body types of Indians, the science that is needed to study Indian skin and the effects of Indian herbs and spices on Indian skin. Along with his wife, he traversed the country to instil the right knowledge in people involved in cosmetology. With every drop of sweat, all he gained was just mere self-satisfaction which meant him all.

Gaining insights on the Indian body type, he said “Self-knowledge is very important and knowing what your body needs is more important. So understand your body type and then use products accordingly. I reckoned the problems faced by the Indian beauty industry and found out about the solutions that suit the Indian body perfectly well. My products are specially meant for Indian Skin with no side-effects whatsoever.”

Rahul Phate always preaches what he teaches which is why he never deviates from his goal of gaining knowledge and giving it out to people. This man with a heart of gold always believed in benefitting people through his immense knowledge on cosmetics. His struggle was real because it meant teaching the science of cosmetics to beauticians through free-of-cost workshops or seminars.

He once said, “Skin of different people belonging to different areas of the world is different from one another. If an Indian uses a European product, he might not benefit from its ingredients because it suits the European body, keeping in mind its geographical conditions. For instance, Indian scalp is oily and full of moisture because of the level of humidity in air. If they use products produced by a Canadian company, their scalp might become oily considering the level of dryness in their climate and they might become bald. Indians have moisture deficit skin which makes it extremely necessary to use products that balances oil and moisture. Half of the world experiences humidity in air and other half experiences dryness in air. So why use a product that doesn’t suit a particular body type in a particular climatic condition? I want to tell Indians to go local with products that are actually meant for their skin and body, instead of jumping into the branded bandwagon that takes you nowhere. “

He has been flourishing for years in his field of cosmetology. He taught about this field for 8 years on TV through a shows named Roopada on a channel – Zee Marathi. Proceeding years, he was aired on other famous TV channels like Colors Marathi, Zee 24 Taas, Lokmat, Saam Marathi, etc. It was not just fame for him; it was all about giving the best to the people of his country which gave him all the bliss he ever hoped for.